Lucky enough to get front row seats on Christmas Eve to see A Christmas Carol at Northern Stage in Newcastle. Handily located between Newcastle University and the Great Museum of the North, a nice easy trip into town by metro to Haymarket, followed by a short walk.

We’ve visited Northern Stage over Christmas now for a few years, it’s a nice alternative to a traditional pantomime at this time of year. James and the Giant Peach and Alice in Wonderland are the most recent, both were quite interactive and definitely aimed at a young family audience. So i was interested to see how they would attempt A Christmas Carol by Charles Dickens, as the book itself in its original format is not easy for children to follow.

We weren’t disappointed, Neil Bartlett’s production was fantastic. Adapted well enough for children to follow, it was like a jazz inspired Christmas Carol musical; a little bit dark in places, but nothing too scary for the younger audience. Very loud and even quite funny in places, especially in the second half, receiving a standing ovation from the audience at the end.

Nick Figgis was absolutely awesome as Scrooge, he played the part so well I completely disliked him for a whole hour, and then something magical happened. He realised the error of his ways and suddenly, he wasn’t just humorous, he was absolutely hilarious. I actually laughed out loud at some parts towards the end, the way he wanted to play tricks on this workers in the office and also on his nephew. His whole persona just changed and it was quite joyful. A real feel good way to spend Christmas Eve. 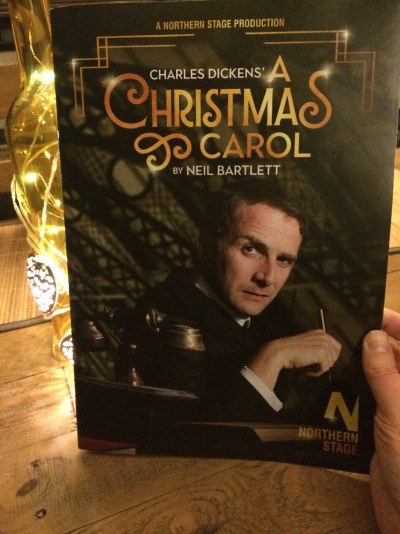 There were a lot older people in the audience without children, so it had a much wider appeal than the usual productions at this time of year. We usually book tickets in November and have no trouble getting great seats, but as i was keen to see this production on Christmas Eve itself, on this occasion i booked as soon as they were released. Definitely worth getting on the mailing list, and not just for Christmas. The have a ton of great shows for all ages, and so reasonably priced and easy to get to so make sure you check it out.

I was so inpired after my visit I bought ‘A Christmas Carol and other Christmas Writings ‘by Charles Dickens – so Christmassy!!

This website uses cookies to improve your experience while you navigate through the website. Out of these cookies, the cookies that are categorized as necessary are stored on your browser as they are essential for the working of basic functionalities of the website. We also use third-party cookies that help us analyze and understand how you use this website. These cookies will be stored in your browser only with your consent. You also have the option to opt-out of these cookies. But opting out of some of these cookies may have an effect on your browsing experience.
Necessary Always Enabled
Necessary cookies are absolutely essential for the website to function properly. This category only includes cookies that ensures basic functionalities and security features of the website. These cookies do not store any personal information.
Non-necessary
Any cookies that may not be particularly necessary for the website to function and is used specifically to collect user personal data via analytics, ads, other embedded contents are termed as non-necessary cookies. It is mandatory to procure user consent prior to running these cookies on your website.
SAVE & ACCEPT