I’m a bit of a film buff, particularly when it comes to horror, ghost and supernatural films (and books). I also love, love, love the ‘found footage’ genre of film, think back to the best and original of these in 1999 with the Blair Witch Project. So I decided to list my Top 10 movies in the month of Halloween, the perfect time to re-visit some I watched first time around and do some great research on the latest ones that I haven’t caught up with yet. I watch a lot of my films on Amazon Prime, for which I’ve already signed up for and also get free next day delivery on loads of stuff, but also on Amazon Video, where you can rent or buy any films not on Prime.

For those of you who are saving your pennies for Trick or Treat Sweets, here are my Top 5 movies from Amazon Prime, followed by my Top 5 from Amazon Video. Amazon Prime offer a 30 day free trial, £7.99/month after that, so the trial itself would be more than enough to enjoy all the scariest films just in time for Halloween!! Enjoy…..but keep the lights on.

In 2009 a haunted house attraction opened in New York, but the entire crew was found dead, except for one. Five years later, footage from the inside the house was found….

This film is so simple and didn’t require a load of special effects, but boy it is creepy as hell!! It builds from the smallest of eerie goings on, till the finale where it unleashes its real horror. A great one for Halloween night.

When Ellen, the matriarch of the Graham family, passes away, her daughter, her husband and their two children begin to unravel cryptic and increasingly terrifying secrets about their ancestry. The more they discover, the more they find themselves trying to outrun the sinister fate they seem to have inherited.

A film with a supernatural twist and a terrifying finale. Every time I hear someone click their tongue, it puts shivers up my spine.

When children in town begin to disappear, a group of young kids is faced with their biggest fears as they square off against evil clown, Pennywise.

The remake and the original are both pretty terrifying. It has enough gore and jump scares to keep you on your toes and even a bit of humour. Pennywise is as always, very disturbing. 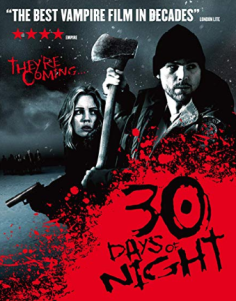 Barrow, Alaska: A remote, isolated town that is plunged into a state of complete darkness for 30 days every winter. It is here that a group of marauding, merciless and bloodthirsty vampires, led by Marlow, are coming. Their intention? A month long, uninterrupted feast of its helpless residents.

Very tense and scary, one of the the most entertaining vampire films I’ve seen, best watched on a chilly night.

Night of the Living Dead

Ranked 1st on Rolling Stone Magazine’s ‘Best zombie movies of all time’, George Romero, the legendary director who helmed the Night of the Living Dead series, brings us a crazed tale of nuclear radiation that raises the dead, and creates a legion of flesh-eating zombies.

Could not have a list of movies to watch in preparation for the scariest night of the year  without including at least one from George A Romero, the king of the zombie movie. It might be old, but its still one of the creepiest movies around. Still fresh and exciting after 50 years. They’re coming for you Barbara!

In October of 1994 three student filmmakers disappeared in the woods near Burkittsville, Maryland while shooting a documentary. They were investigating the legend of ‘The Blair Witch’. A year later their footage was found.What follows is a document of their discoveries, and, the horrors that they encountered.

The original found footage done on a tiny budget with no special effects, this film plays on the psychological aspect throughout until its is pretty petrifying ending.

Based on a true story, The Conjuring tells the suspenseful tale of Lorraine and Ed Warren world renowned paranormal investigators, who were called to help a family terrorized by a dark presence in a secluded farmhouse.

A brilliant and genuinely frightening story, made all the more terrifying as it was based on a real life married couple who investigated paranormal events.

When a nun commits suicide, a priest and novitiate investigate. Together they uncover the order’s unholy secret, the same demonic nun that first appeared in “The Conjuring 2″.

The nun is truly terrifying. If you enjoyed the Conjuring Films (see above) this is a good addition to them as it explains more of the story.

This is the story of Katie and Micah, a carefree couple who become haunted by an unseen presence in their house. They decide to investigate the increasingly bizarre and escalating intrusions by setting up a video camera to capture evidence of the demonic presence in their house, only to find much more than they ever imagined.

The one and only time I have had to go to sleep with the lights on after watching a horror movie. It’s more psychological  than visual and for this reason alone, makes it one of the scariest movies I have ever watched. Strange and bizarre events build up to a terrifying climax proving what I have always said, horror movies are at their best when you never see what it is to be afraid of.

Josh and Renai are a happily married couple with three young children who have moved into an idyllic new suburban home. When tragedy strikes their young son, Josh and Renai begin to experience things in the house that are beyond explanation. Before long, their lives are turned upside down by demonic forces, hell-bent on terrorising their existence.

Tiptoe Thru the Tulips …. I’m just going to leave this here for you to click and enjoy.

What are your favourite films to watch at this time of year? Do you prefer plain and simple horror, like a good old slasher movie or the slow build up of a creepy paranormal film?

This website uses cookies to improve your experience while you navigate through the website. Out of these cookies, the cookies that are categorized as necessary are stored on your browser as they are essential for the working of basic functionalities of the website. We also use third-party cookies that help us analyze and understand how you use this website. These cookies will be stored in your browser only with your consent. You also have the option to opt-out of these cookies. But opting out of some of these cookies may have an effect on your browsing experience.
Necessary Always Enabled
Necessary cookies are absolutely essential for the website to function properly. This category only includes cookies that ensures basic functionalities and security features of the website. These cookies do not store any personal information.
Non-necessary
Any cookies that may not be particularly necessary for the website to function and is used specifically to collect user personal data via analytics, ads, other embedded contents are termed as non-necessary cookies. It is mandatory to procure user consent prior to running these cookies on your website.
SAVE & ACCEPT